Lima is a great city with lots of touristic places to discover. Here we tell you what to do in Lima. To really enjoy this city, it’s best if you visit it in the summer so that you can take advantage of its beaches.

What to do in Lima by day?

To enjoy Lima by day, you should really go to the touristic sites that I’m going to describe to you.

This square is located in the 9th block of the Colmena avenue (literally, “bee-hive avenue”!) in the historic center of the city. It was declared a UNESCO World Heritage Site in 1988. In the center of the square you will see the monument that was erected to honour the liberator of Perú: José de San Martín.

Around this statue, the Grand Hotel Bolívar, Colón Theatre, Giacoletti Building, and the Fenix Building, among other buildings of a Neocolonial architectural style. I recommend that you consider this beautiful and emblematic place from among the places to see in Lima. 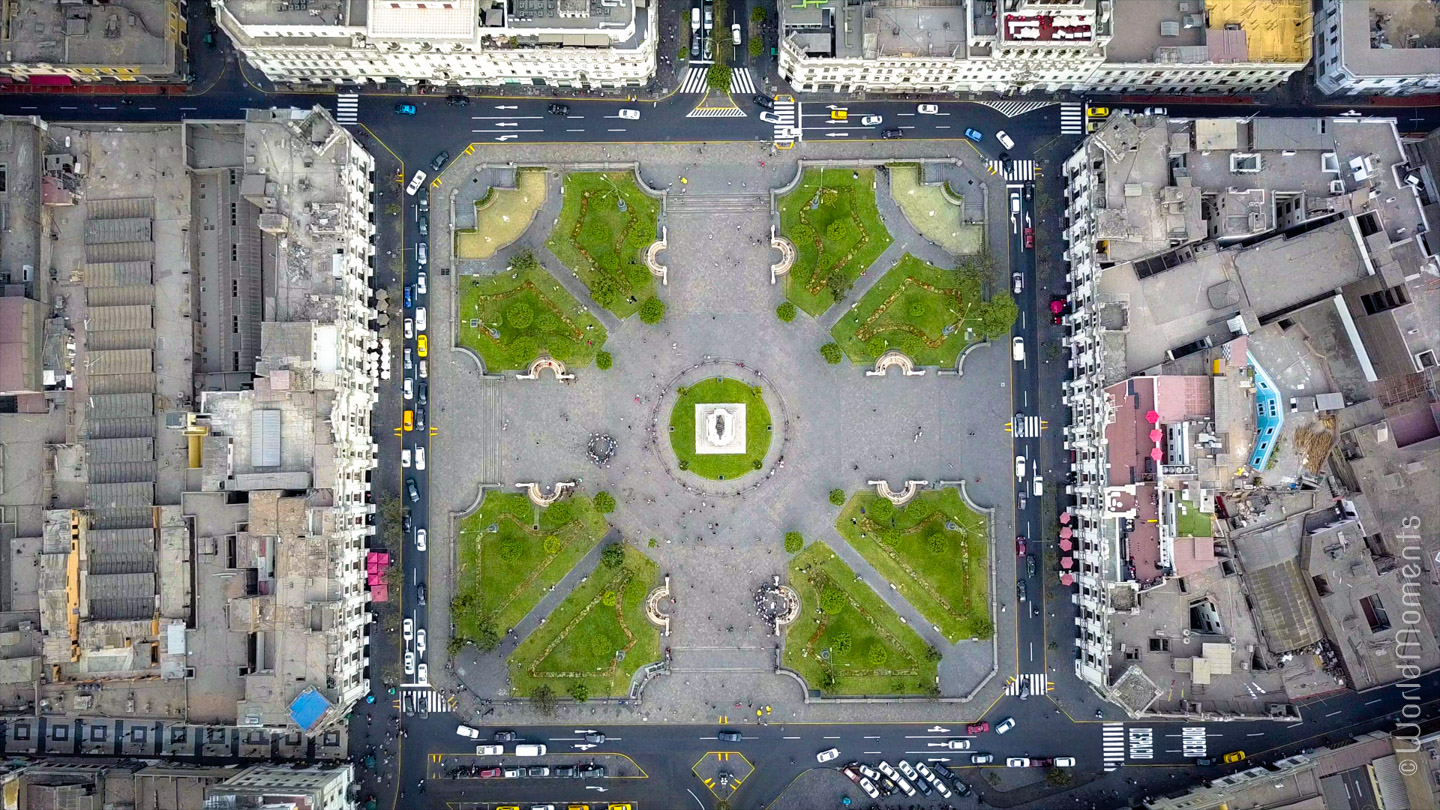 What to do in Lima – San Martin Square: Square that honours San Martin, the liberator of Perú.

Trujillo Street is a beautiful, ancient and commercial passageway that connects the center of Lima with the neighbourhood of Rímac through the oldest stone bridge in all of Lima. Strolling along this street will show you how ancient this street is, thanks to the architecture of the houses located along this road and the gorgeous wooden balconies that make this street so pretty. 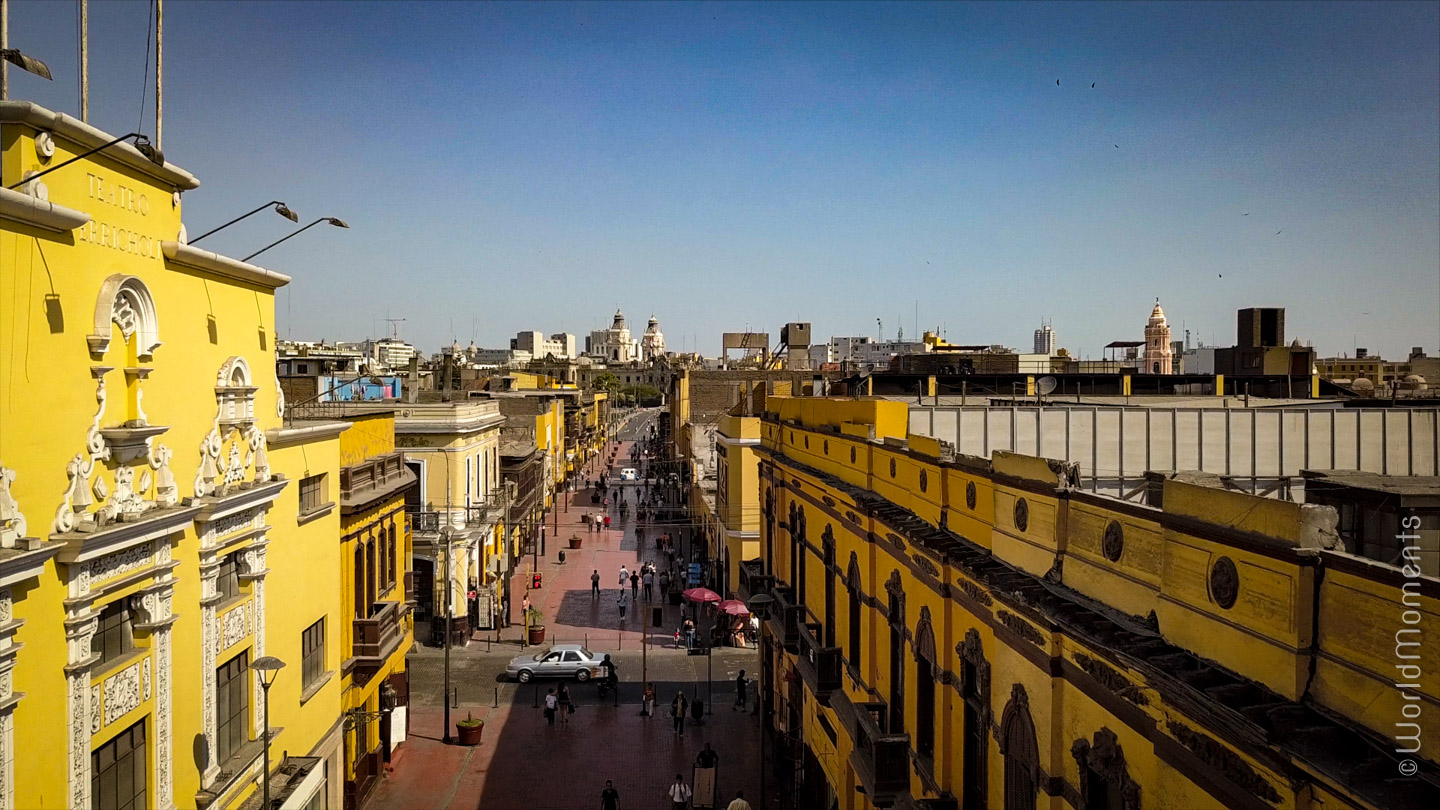 What to do in Lima – Trujillo Street: Historic street of Lima adorned with mansions and wooden balconies.

This is the main square, central in Lima and visited by tourists and locals alike for its being a historic icon of the city. This square occupies a whole block and is surrounded by buildings of great importance for the city, such as the Governmental Palace of Perú, the Cathedral of Lima, Peru Square, the Sagrario Church, and the Archbishop’s Palace, among others.

You can practically feel and breathe the historicity of this square, but as always we want to make sure you are safe, so please keep an eye on your belongings. It’s not dangerous here, as long as you pay attention!

What to do in Lima – Place of Arms: Main square where the city of Lima was founded.

Only a few blocks from the Place of Arms, you will find the River Esplanade. There’s a little square here too, called the Great Chabuca. You can enjoy green areas, pretty views, and cycling here, but the best of it all is undoubtedly the food. You can find such delicious dishes as ceviche, “tiradito”, tuna and potato terrine, or how about a salted pork loin? In reality, there is a lot to do in Lima, and especially a lot to eat. 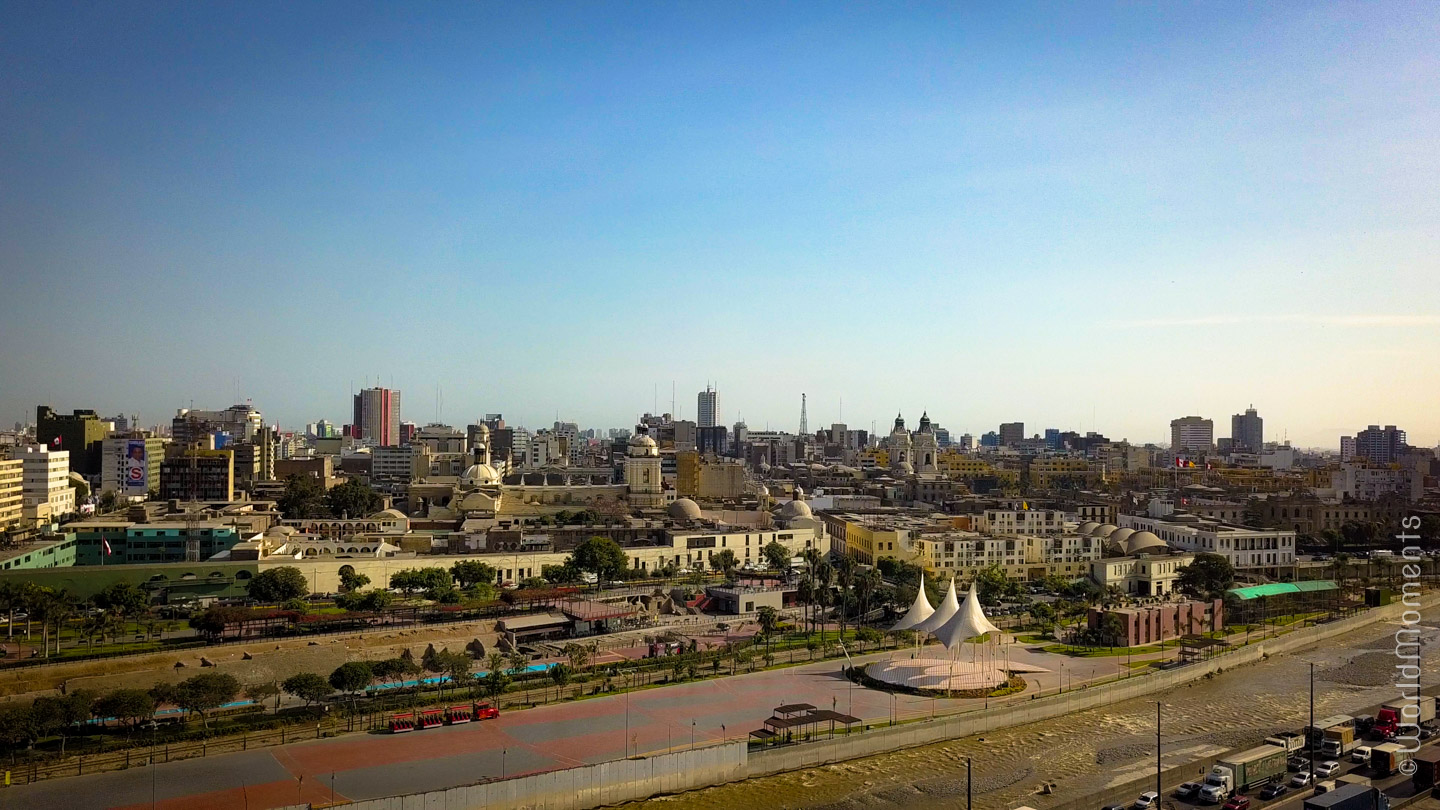 What to do in Lima – Center: View of the River Esplanade and the center of Lima.

This is a bridge with a very modern design that we think you’ll like. It is located over the Balta slope leading downwards toward Miraflores beach. Thanks to the beauty of its construction, we think that visiting this bridge merits a spot on your list of things-to-see in Lima. 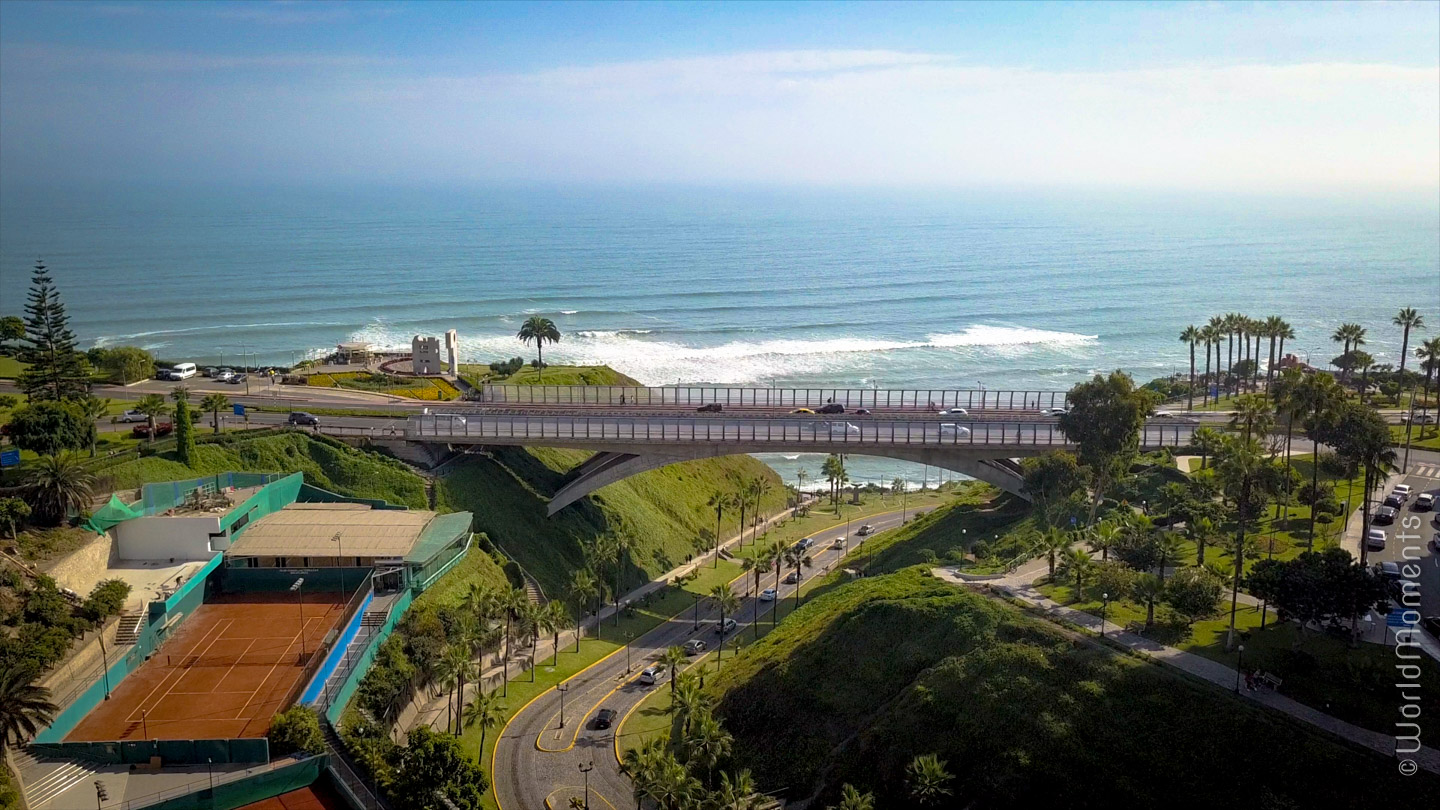 What to do in Lima – Twin Bridge: Modern bridge located over the Balta slope leading to the beach.

Larcomar is a beautiful and exclusive commercial centre in Miraflores where you can also enjoy a gorgeous view of the sea. I recommend that you stop by this mall to see some of the Peruvian handicrafts, try some of the best dishes and cocktails that are typical of Perú, and of course take a gander at the ocean. 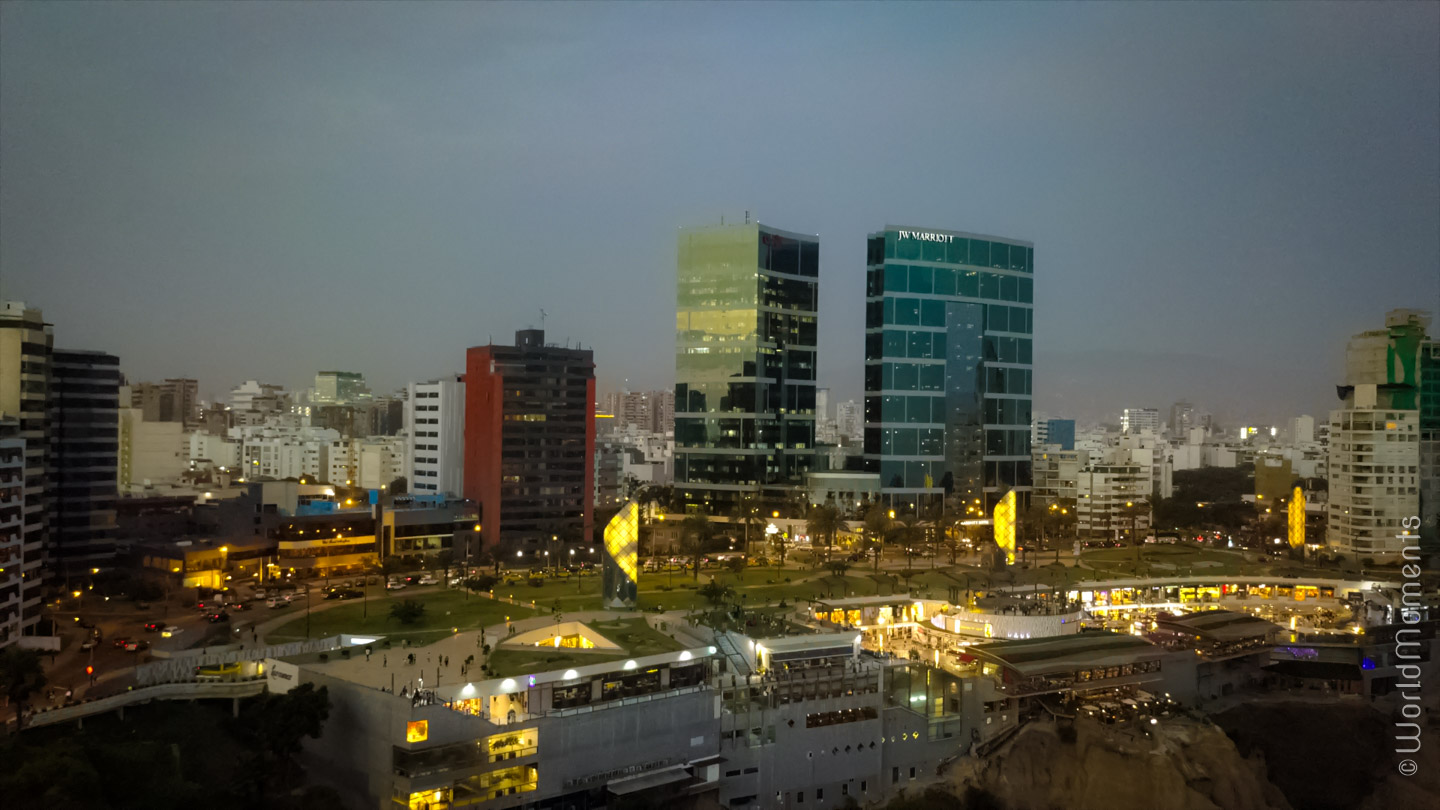 What to do in Lima – Larcomar: Exclusive commercial centre of Miraflores.

This is another green space in Miraflores that offers walks and a view of the ocean that we think you will find very pleasant. You can also fly here – paragliding costs about 70 USD. Check out Miraflores from the air, it’s one of the best things to do in Lima! 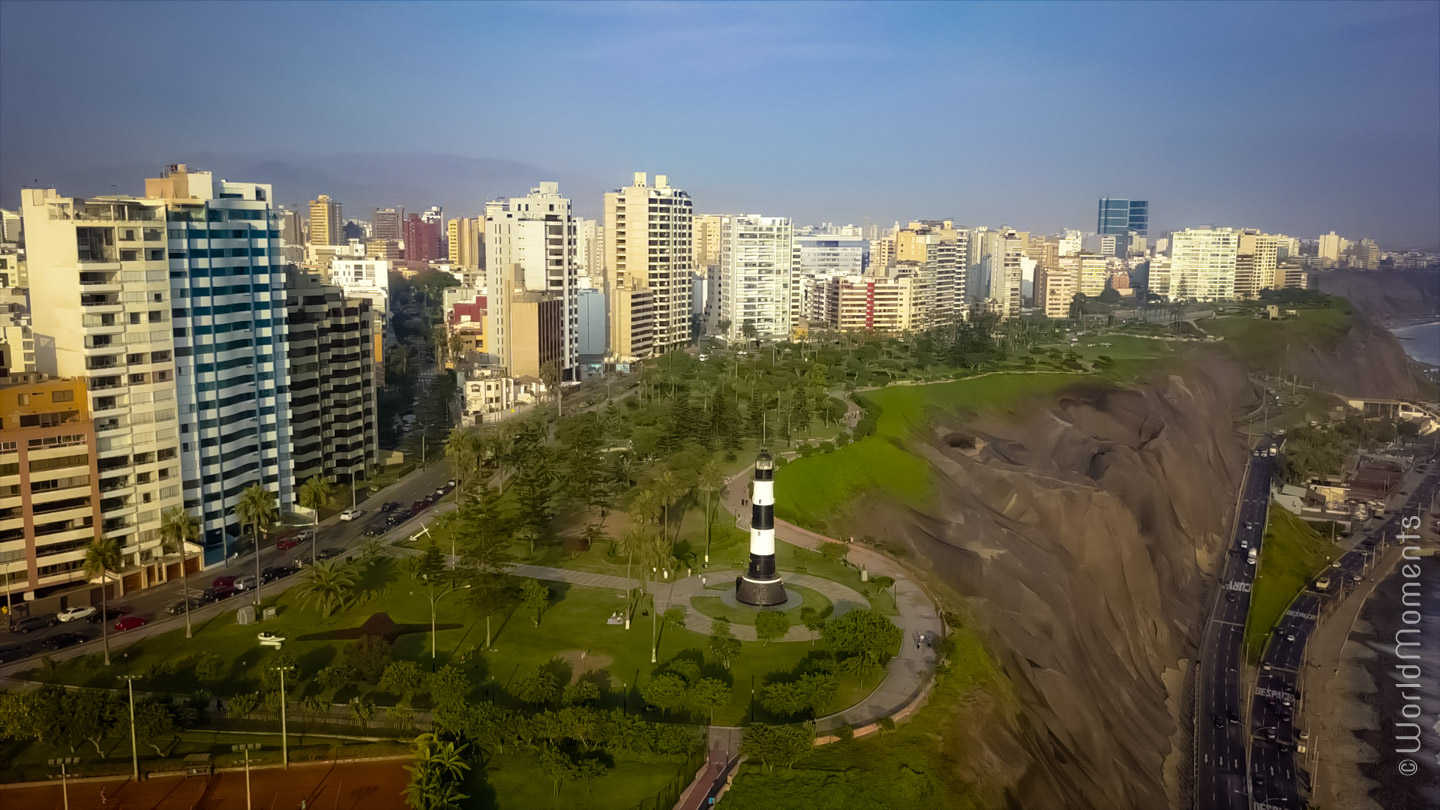 What to do in Lima – Antonio Raimondi Park: Park with spectacular views to the sea.

This park can be found right in the heart of Miraflores and it is one of the top spots for tourist in all of Miraflores. The park is surrounded by restaurants, bars, clubs and even hand-pushed carts that vendors use to sell traditional Lima deserts such as picarones, churros, mazamorra morada, among others. Kennedy Park is also known as the Park of Cats, due to the surprising quantity of cats that call this park home. 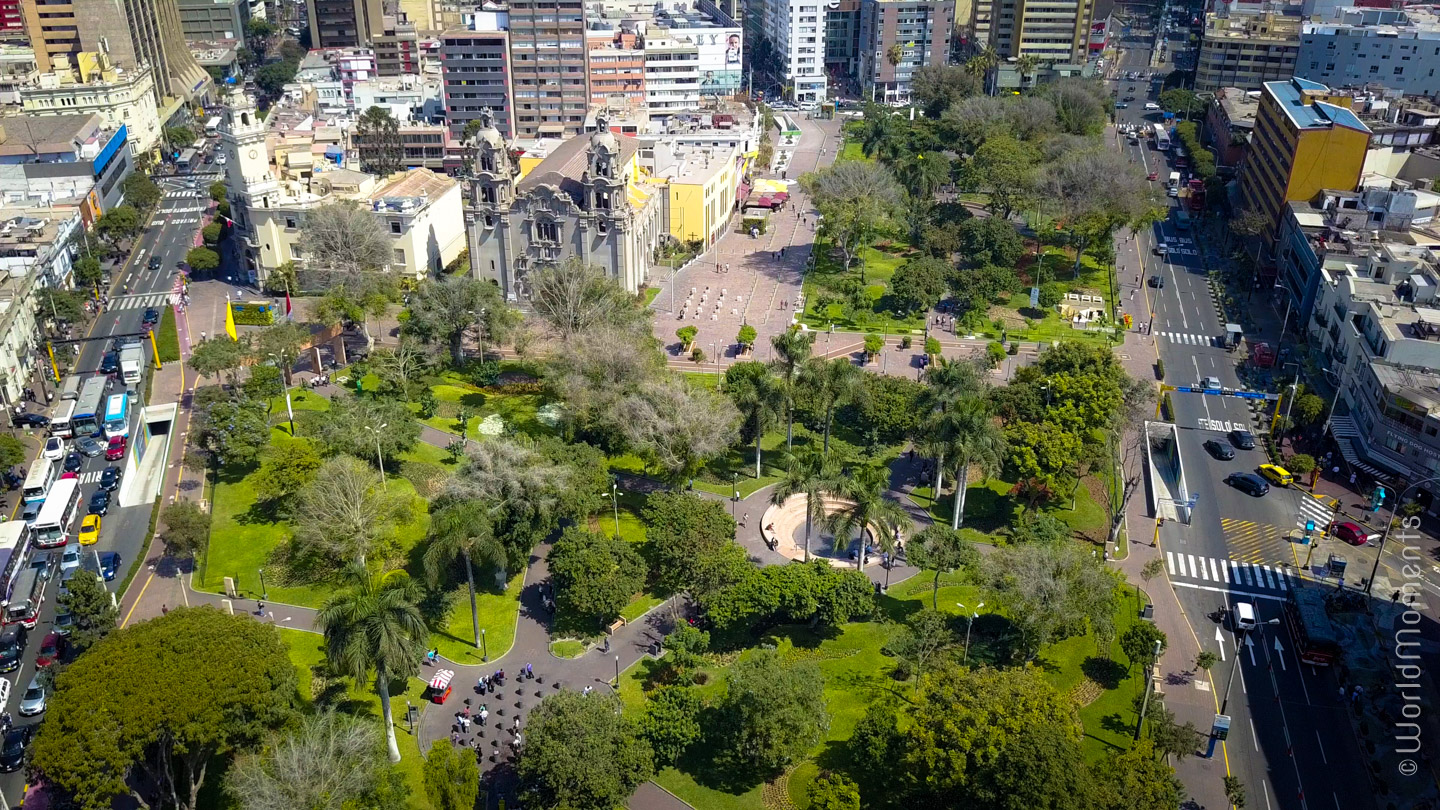 What to do in Lima – Kennedy Park: Attractive park where many cats live.

Beside Antonio Raimondi Park is the Park of Love: yet another park with a breathtaking view of the ocean and spaces to walk, bicycle, and roller-blade. You’ll also see an intriguing statue of a couple kissing, which was inaugurated on the 14 of February in 1993. 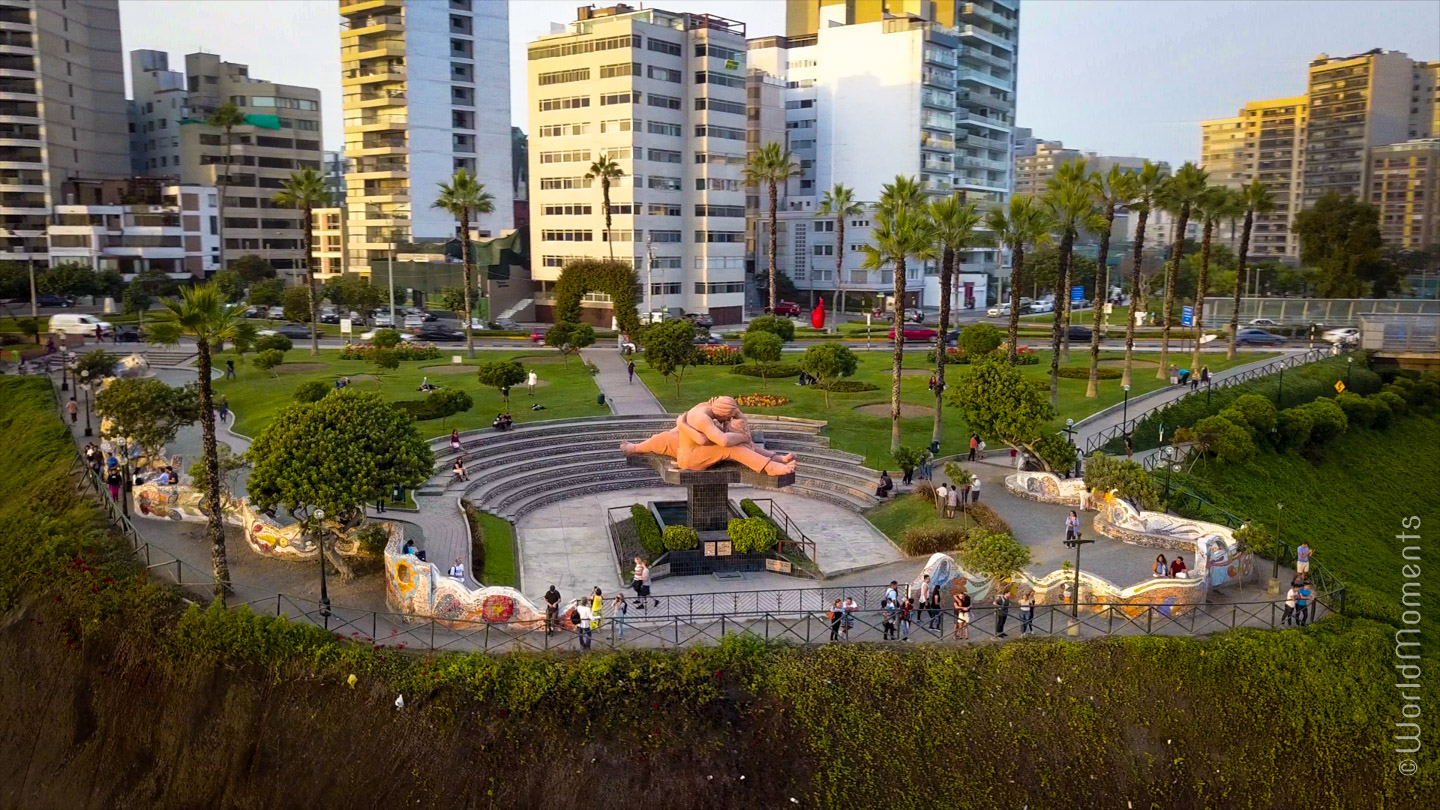 What to do in Lima – Park of Love: Park that honours the day of Saint Valentine.

Another thing you should visit in Lima is this archaeological site in Miraflores. The huaca (or, “monument”) belonged to the Lima, Wari and Ychsma cultures between the years 400 to 1400 CE. This is a very important site, locally, and for tourists, and it is a very visited site despite having been abandoned for many years. 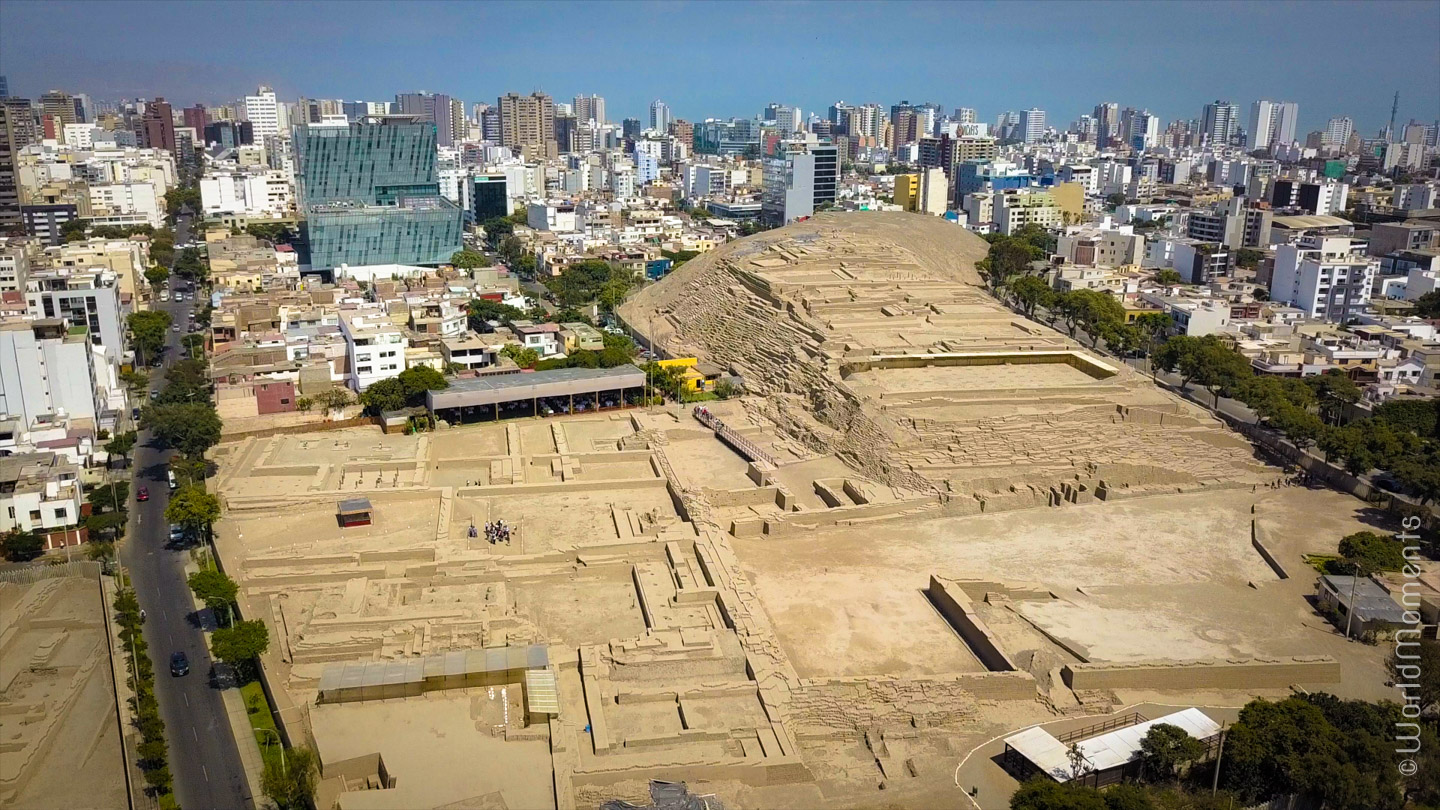 What to do in – Huaca Pucllana: recovered archaeological monument that was in use from 400 to 1400 CE.

In this square rests a statue that is very important for the folks of Lima – that of the great Chabuca Granda, a composer and singer of a kind of Peruvian Creole music. A nice spot for a walk and to admire the pleasant view from the Bridge of Sighs. Old houses and colourful flowers also make this place very welcoming and charming.

When you make your list of what to do in Lima, don’t leave this item off your list for any reason! This beautiful spot has a church and library but the most attractive thing about it is a sculpture that can be found in the center of the square. The statue is called La Danaide Venus, from Greek myths, and it is surrounded by other marble statues. 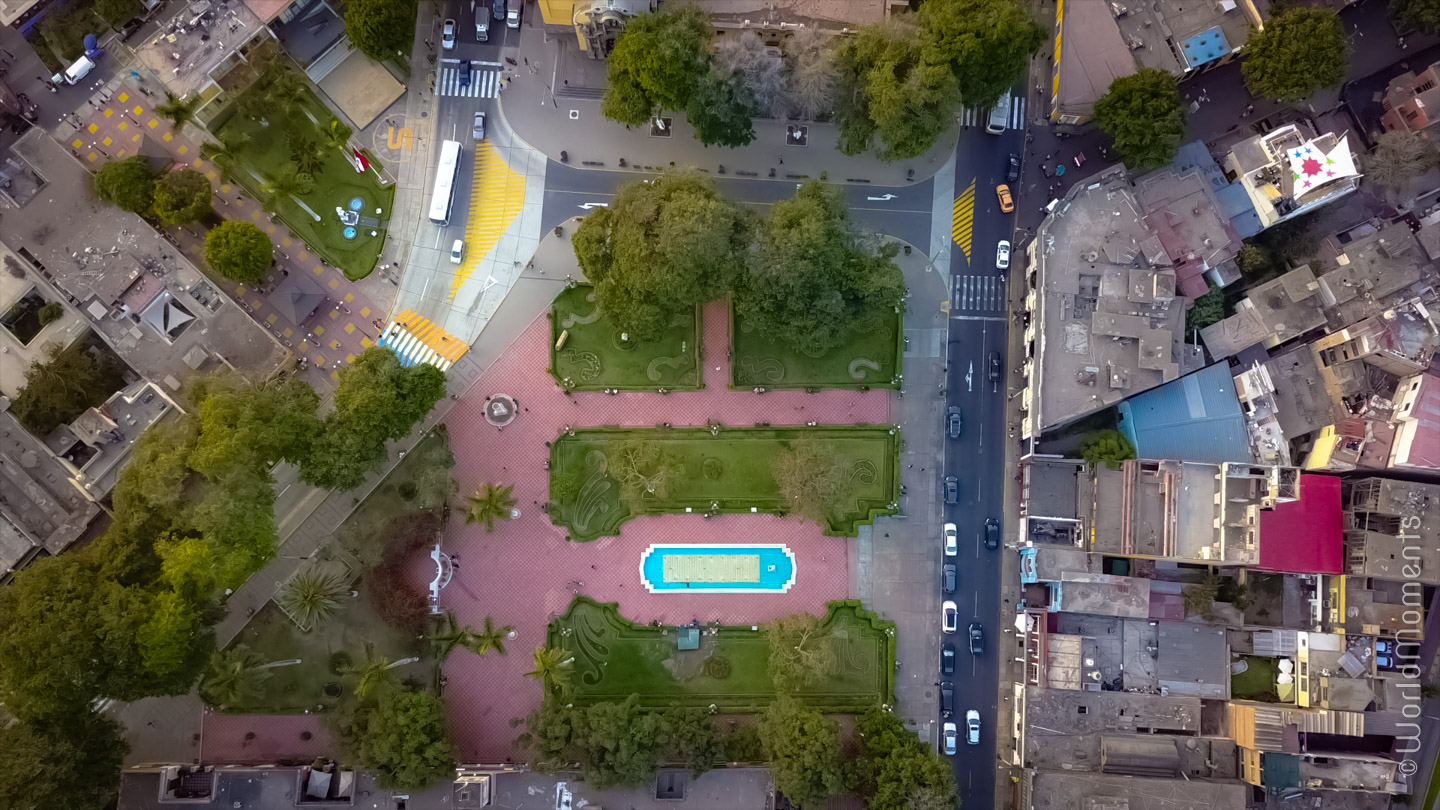 What to do in Lima – Barranco Main Square: Beautiful plaza located in the centre of the Barranco district.

This look-out is in the La Punta Callao district that draws a lot of touristic attraction thanks to its spectacular view of the Cantolao beach.
(See beaches of Lima) from the viewpoint. I also recommend that you go for a walk in the colourful neighbourhood called El Chucuito, which is just beside La Punta. 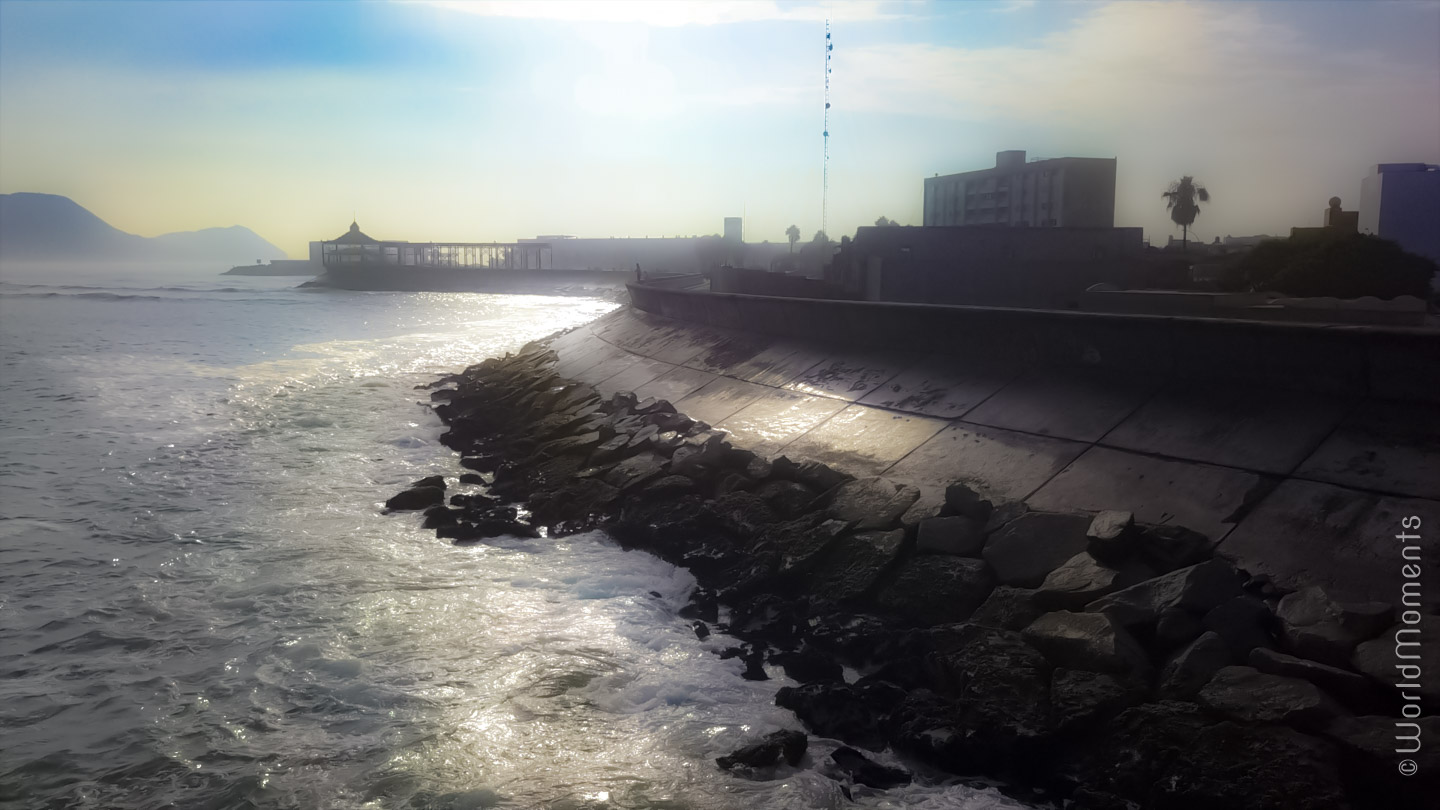 What to do in Lima – Viewpoint La Punta Callao: Beautiful view of the Cantolao Beach in Callao.

In Callao, you can also visit this marvelous place. The Palomino Islands are a group of small islands where plenty of seals and birds live. The best thing about this place is that you can actually swim with the seals! This tour costs about 75.00 USD and they take you on a yacht to the islands. This is without a doubt one of the best places to see and experience in Lima. 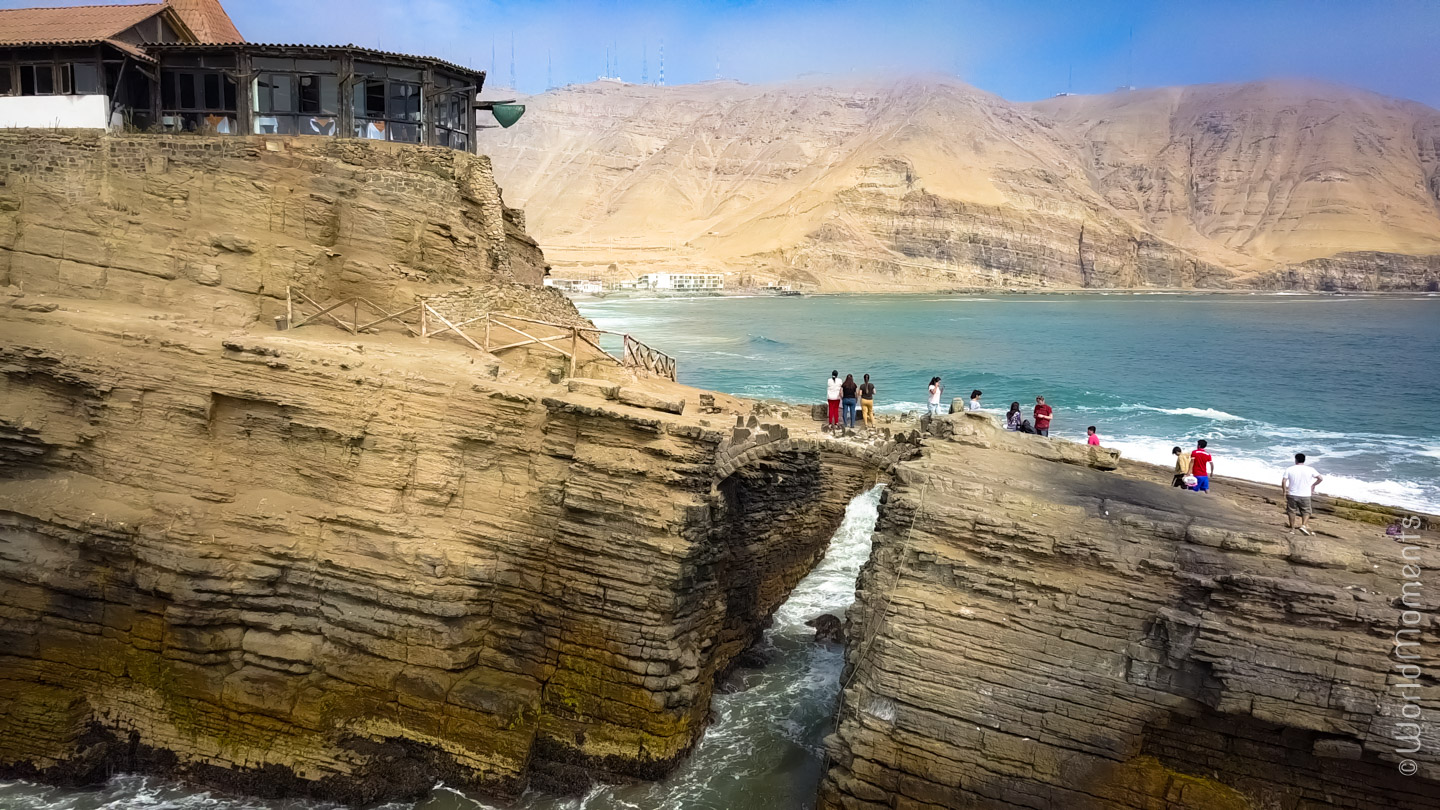 What to do in Lima – The Diving Priest: Enjoyable restaurant that serves Peruvian food and seafood, named in honour of an ancient love story.

¿What to do in Lima by night?

Thanks to its delicious gastronomy, Lima offers the chance for splendid suppers. Take a trip down the Street of Pizzas which can be found in front of Park Kennedy in Miraflores; we doubt you’ll ever want to leave!

What to do in Lima by night – The Place of Arms illuminated at night looks magical.

To live the genuine Peruvian experience, you can’t leave Lima without first visiting a Peña. These are area to dance typical Peruvian dances with incredible ambiances – dancing in one of these spots will be an unforgettable experience for you. In Barranco, you can find one of the most popular Peñas.

Another plan for you that we recommend in Lima by night is to visit the Park of the Reserve or the Park of the Waters. In either of these parks, you can enjoy fantastic water shows with dancing lights.

Did you know about all of these jewels of Lima, Perú? We invite you to check out our other articles in which we describe the best beaches of Lima.